The Octave of Ascension 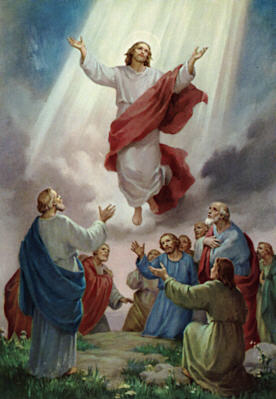 GRANT, we beseech thee, Almighty God, that like as we do believe thy only-begotten Son our Lord Jesus Christ to have ascended into the heavens; so we may also in heart and mind thither ascend, and with him continually dwell, who liveth and reigneth with thee and the Holy Ghost, one God, world without end. Amen. ** This Collect is to be said daily throughout the Octave.


Blessed art thou, O Lord God Almighty, the Ancient of Days, who hast set thy Son Jesus Christ our Lord upon the glorious throne of thy kingdom, exalted far above all peoples, all places, all times, eternally; that he who hath worn our flesh, and borne our manhood into the Holy of Holies, should henceforth pour down heavenly gifts upon His Church, and be both our righteous judge and most merciful intercessor; to whom with thee, O Father, and thee, O Holy Ghost, one God, be ascribed all might, majesty, dominion, and praise, now and for ever. Amen. ** This Collect may be said after the prayers of the people and additional collects throughout the Octave.

THE former treatise have I made, O Theophilus, of all that Jesus began both to do and teach, until the day in which he was taken up, after that he through the Holy Ghost had given commandments unto the apostles whom he had chosen: to whom also he shewed himself alive after his passion by many infallible proofs, being seen of them forty days, and speaking of the things pertaining to the kingdom of God: and, being assembled together with them, commanded them that they should not depart from Jerusalem, but wait for the promise of the Father, which, saith he, ye have heard of me. For John truly baptized with water; but ye shall be baptized with the Holy Ghost not many days hence. When they therefore were come together, they asked of him, saying, Lord, wilt thou at this time restore again the kingdom to Israel? And he said unto them, It is not for you to know the times or the seasons, which the Father hath put in his own power. But ye shall receive power, after that the Holy Ghost is come upon you: and ye shall be witnesses unto me both in Jerusalem, and in all Judea, and in Samaria, and unto the uttermost part of the earth. And when he had spoken these things, while they beheld, he was taken up; and a cloud received him out of their sight. And while they looked steadfastly toward heaven as he went up, behold, two men stood by them in white apparel; which also said, Ye men of Galilee, why stand ye gazing up into heaven? this same Jesus, which is taken up from you into heaven, shall so came in like manner as ye have seen him go into heaven.

JESUS said, Behold, I send the promise of my Father upon you: but tarry ye in the city of Jerusalem, until ye be endued with power from on high. And he led them out as far as to Bethany, and he lifted up his hands, and blessed them. And it came to pass, while he blessed them, he was parted from them, and carried up into heaven. And they worshiped him, and returned to Jerusalem with great joy: and were continually in the temple, praising and blessing God.