This is another case of the stalwarts of the left - public school administrators - have fired another shot in their war on Christianity.

A school board in Colorado is withholding Erica Corder's High School diploma, unless and until she makes an apology for making a comment during her commencement speech, encouraging her audience to "get to know Jesus Christ".

I am sure that they will argue that one of the "Religion Clauses" that has been interpreted (distorted) over the years applies. That may be the case if this young lady was a school official or other government employee, but as a private citizen she has a right to freedom of speech, regardless of the venue, but with the customary exceptions (like yelling "fire" to induce panic, etc.)

They go on to claim that she did not make the remarks during her speech rehearsal, and maybe she did not intend to utter those words until the last minute or at all, but may at that moment on the stage she was filled with the Holy Ghost as Mark 13:11 (KJV)

So let us all support and wish the Corder's Godspeed in fighting what amounts to extortion.

A point to ponder, If Erica had been a Muslim and had made any religious remarks, would she have been given a pass?

Colorado Student Files Lawsuit Over Commencement Speech That Mentioned Jesus
Posted by Kevin at 19:00 1 comment: Links to this post 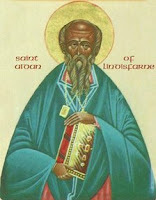 Missionary, Abbot, Bishop
31 August 651
*****
Saint Aidan of Lindisfarne, the Apostle of Northumbria (died 651), was the founder and first bishop of the monastery on the island of Lindisfarne in England. A Christian missionary, he is credited with restoring Christianity to Northumbria. Aidan is the anglified form of the original Old Irish Áedán.
*****
The Gospel first came to the northern English in 627, When King Edwin of Northumbria was converted by a mission from Canterbury (51:17 N 1:05 E) led by Bishop Paulinus, who established his see at York. Edwin's death in battle in 632 was followed by a severe pagan reaction. A year later, Edwin's exiled nephew Oswald gained the kingdom, and proceeded at once to restore the Christian mission.
*****
During his exile, Oswald had lived at Columba's monastery of Iona (see 9 June), where he had been converted and baptized. Hence he sent to Iona (56:19 N 6:25 W), rather than to Canterbury, for missionaries. The first monk to preach was a man named Corman, who had no success, and returned to Iona to complain that the Northumbrians were a savage and unteachable race. A young monk named Aidan responded, "Perhaps you were too harsh with them, and they might have responded better to a gentler approach." At this, Aidan found himself appointed to lead a second expedition to Northumbria. He centered his work, not at York, but in imitation of his home monastery, on Lindisfarne, an island off the northeast coast of England, now often called Holy Isle (55:41 N 1:48 W).
*****
With his fellow monks and the English youths whom he trained, Aidan restored Christianity in Northumbria, King Oswald often serving as his interpreter, and extended the mission through the midlands as far south as London.
*****
Aidan died at the royal town of Bamborough, 31 August, 651. The historian Bede said of him: "He neither sought nor loved anything of this world, but delighted in distributing immediately to the poor whatever was given him by kings or rich men of the world. He traversed both town and country on foot, never on horseback, unless compelled by some urgent necessity. Wherever on his way he saw any, either rich or poor, he invited them, if pagans, to embrace the mystery of the faith; or if they were believers, he sought to strengthen them in their faith and stir them up by words and actions to alms and good works."
*****
Propers for Aidan
-----
The Collect
------------
O ALMIGHTY God, who in thy providence didst choose thy servant Aidan to be an apostle to the people of England, to bring those who were wandering in darkness and error to the true light and knowledge of thee: Grant us so to walk in that light, that we may come at last to the light of everlasting life; through the merits of Jesus Christ thy Son our Lord. Amen.
*****
The Epistle - 1 Corinthians 9:16-23.
--------------------------------------
FOR though I preach the gospel, I have nothing to glory of: for necessity is laid upon me; yea, woe is unto me, if I preach not the gospel! For if I do this thing willingly, I have a reward: but if against my will, a dispensation of the gospel is committed unto me. What is my reward then? Verily that, when I preach the gospel, I may make the gospel of Christ without charge, that I abuse not my power in the gospel. For though I be free from all men, yet have I made myself servant unto all, that I might gain the more. And unto the Jews I became as a Jew, that I might gain the Jews; to them that are under the law, as under the law (though not being myself under the law), that I might gain them that are under the law; to them that are without law, as without law, (being not without law to God, but under the law to Christ,) that I might gain them that are without law. To the weak became I as weak, that I might gain the weak: I am made all things to all men, that I might by all means save some. And this I do for the gospel's sake, that I might be partaker thereof with you.
*****
The Gospel - St. Matthew 19:27-30.
---------------------------------------
THEN answered Peter and said unto Jesus, Behold, we have forsaken all, and followed thee; what shall we have therefore? And Jesus said unto them, Verily I say unto you, That ye which have followed me, in the regeneration when the Son of man shall sit in the throne of his glory, ye also shall sit upon twelve thrones, judging the twelve tribes of Israel. And every one that hath forsaken houses, or brethren, or sisters, or father, or mother, or wife, or children, or lands, for my name's sake, shall receive an hundredfold, and shall inherit everlasting life. But many that are first shall be last; and the last shall be first.
*****
Resources
http://elvis.rowan.edu/~kilroy/JEK/08/31.html
http://www.commonprayer.org/calend/propers/aidan.cfm
http://en.wikipedia.org/wiki/Aidan_of_Lindisfarne
Posted by Kevin at 08:53 No comments: Links to this post

This article is right-on, I hope that those who read this and belong to one of the non-American Anglican Jurisdictions in the U.S. of A. can see that by keeping the 1979 "other" book and womens ordination they are just rewinding history.

Within 50 years they will be back to where they are today and will probably dilute/pollute the Global South in the process.

Don't get me wrong, there are many people in these groups with the right idea, but the wrong material and guidance. There is a wonderful Diocese of Bolivia parish in my area, but they are stuck to the 1979 "other book".

The Prayer Book Society: News: Why using TEC Prayer Book of 1979 is spiritually dangerous!
Posted by Kevin at 17:28 No comments: Links to this post

Here is another case of how many "artists" are out-of-touch with the rest of the world. I don't think that this can even be classified as art, it looks like she took a photo and a painting, done by others and placed them next to each other on the same board. 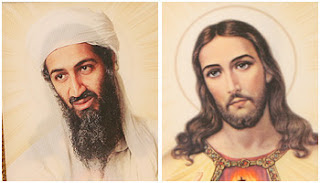 And where is the outrage from Muslims, isn't it blasphemous to have a mere mortal man (UBL), even though he is a "great" Mujahadeen, compared to Isa (Jesus) the second greatest prophet of Islam. Maybe I am too early on this one, maybe the Islamist rage-boys are still waking-up, having a little coffee, going to the shops to buy Australian flags to burn.

After all is said in done, it is probably nothing more than a two-bit, hack artists, that couldn't sell a piece of her work if it didn't have this buzz about it and who is trying to make a name for herself.

Artist defends 'Osama bin Christ' against Howard NEWS.com.au
Posted by Kevin at 09:12 No comments: Links to this post 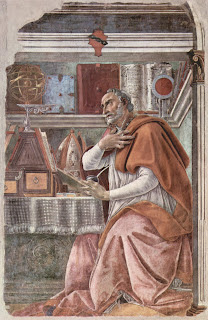 Got a plug over at Stand Firm.

Welcome to all the new visitors.


Stand Firm - Carnival of the New Anglican Blogs
Posted by Kevin at 15:58 No comments: Links to this post

Will Be Back Soon

It seems like forever since I have posted here.

This summer has been a long string of family, work and health issues that have taken most of my time and attention.

I look forward to getting back to the blog(s) within the next couple of weeks, or sooner.

Hope you all have had a great summer and God Bless,

Kevin
Posted by Kevin at 15:48 No comments: Links to this post