It doesn’t seem to matter what I am doing lately, or what media I find it in, but for the past few days one subject keeps coming-up, Masculine Christianity. 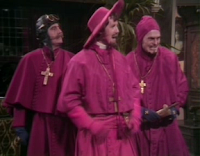 Now it seems when you use the phrase “masculine Christianity” around some people, it offends them to no end; they start conjuring-up images of horse borne crusaders impaling un-armed non-believers or the Spanish Inquisition.

But then again those are the same people who

like an emasculated Church, who feel threatened by strong, secure male types. They prefer the women to wear purple and the men to wear pink.

The moral center of our nation, culture and civilization is corrupt and rotten. We have lost the intestinal fortitude necessary to keep order in our lives; the family and the

Church has lost the most vital component, the male persona. A male persona that is willing to speak plainly, love his God, his family and his country, to hug those in need of comfort, but is also ready to stomp-out the evil in the world.

It is a hard sell, especially when you have people who are suppose to be example of strong traditional Christian values, that hide the fact that they are as morally bankrupt as any hedonist on the planet.

Now, before I get flamed for being, un-Christian and casting the first stone, I know that they can be forgiven if they are truly penitent; I am just using examples. There is an expression that Christians are our own worst enemy, when it comes to bringing people into the Church. This goes back to the “do as I say not as I do” syndrome of hypocrisy.

We all remember the ultra judgmental “Church Lady” , well this character is like my paternal

great-grandmother (the Über-Methodist) and my maternal great-grandmother (the Über-Baptist), they did more to drive my family away from Church as anything; and there are still many like them continuing the tradition (in all denominations) of driving people away because they don’t meet the strict Church Lady moral code. My point here is that we never hear of the “Church Gent”, well maybe I know of one (an RC who is in touch with his feminine side, he is straight though).

Here are some of the links to material on the internet that spawned this post.