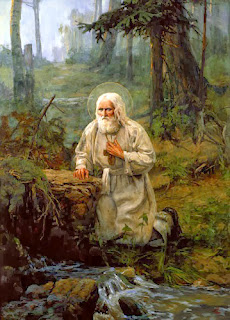 (Russian: Серафим Саровский) born Prokhor Moshnin (Прохор Мошнин), is one of the most renowned Russian monks and mystics in the Orthodox Church. He is generally considered the greatest of the 19th century startsy (elders). Seraphim extended the monastic teachings of contemplation, theoria and self-denial to the layperson. He taught that the purpose of the Christian life was to acquire the Holy Spirit. Perhaps his most popular quotation amongst Orthodox believers is "Acquire a peaceful spirit, and thousands around you will be saved."

Born in 1754, he was baptized with the name of Prochor, after Saint Prochorus, one of the first Seven Deacons of the Early Church and the disciple of John the Evangelist. His parents, Isidore and Agathia Moshnin, lived in Kursk, Russia. His father was a merchant, but business did not interest the devout boy. According to Orthodox Church tradition, a wonderworking icon of the Theotokos (Virgin Mary), Our Lady of Kursk healed the young boy. Seraphim later experienced a number of visions.

In 1777, at the age of 19, he joined the Sarov monastery as a novice (poslushnik). In 1786 he was officially tonsured (took his monastic vows) and given the religious name of Seraphim (which means "fiery" or "burning" in Hebrew). Shortly afterwards, he was ordained a hierodeacon (monastic deacon). In 1793 he was ordained as a hieromonk (monastic priest) and became the spiritual leader of the Diveyevo convent, which has since come to be known as the Seraphim-Diveyevo Convent.

Soon after this, Seraphim retreated to a log cabin in the woods outside Sarov monastery and led a solitary lifestyle as a hermit for 25 years. During this time his feet became swollen to the point that he had trouble walking.

One day, while chopping wood, Seraphim was attacked by a gang of thieves who beat him mercilessly with the handle of his own axe. He never resisted, and was left for dead. The robbers never found the money they sought, only an icon of the Theotokos (Virgin Mary) in his hut. Seraphim had a hunched back for the rest of his life. However, at the thieves' trial he pleaded to the judge for mercy on their behalf.

After this incident Seraphim spent 1,000 successive nights on a rock in continuous prayer with his arms raised to the sky, an almost super-human feat of asceticism, especially considering the pain from his injuries.

In 1815, in obedience to a reputed spiritual experience that he attributed to the Virgin Mary, Seraphim began admitting pilgrims to his hermitage as a confessor. He soon became immensely popular due to his reputation for healing powers and gift of prophecy. Hundreds of pilgrims per day visited him, drawn as well by his ability to answer his guests' questions before they could ask.

As extraordinarily harsh as Seraphim often was to himself, he was kind and gentle toward others — always greeting his guests with a prostration, a kiss, and exclaiming "Christ is risen!", and calling everyone "My joy." He died while kneeling before an icon of the Theotokos at the age of 74. This icon is currently in the house of the catholic Community of Beatitudes in Bad Driburg, Germany.


Propers for Seraphim of Sarov - Mystic and Monastic

O GOD, by whose grace the blessed Seraphim of Sarov enkindled with the fire of thy love, became a burning and a shining light in thy Church: Grant that we may be inflamed with the same spirit of discipline and love, and ever walk before thee as children of light; through Jesus Christ our Lord. Amen.

HOWBEIT what things were gain to me, these have I counted loss for Christ. Yea verily, and I count all things to be loss for the excellency of the knowledge of Christ Jesus my Lord: for whom I suffer the loss of all things, and do count them but dung, that I may gain Christ, and be found in him, not having a righteousness of mine own, even that which is of the law, but that which is through faith in Christ, the righteousness which is of God by faith: that I may know him, and the power of his resurrection, and the fellowship of his sufferings, becoming conformed unto his death; if by any means I may attain unto the resurrection of the dead. Not that I have already obtained, or am already made perfect: but I press on, if so be that I may apprehend that for which also I was apprehended by Christ Jesus. Brethren, I count not myself yet to have apprehended: but one thing I do, forgetting the things which are behind, and stretching forward to the things which are before, I press on toward the goal unto the prize of the high calling of God in Christ Jesus. Let us therefore, as many as be perfect, be thus minded: and if in anything ye are otherwise minded, even this shall God reveal unto you.

JESUS said unto his disciples, Therefore I say unto you. Be not anxious for your life, what ye shall eat; neither for the body, what ye shall put on. The life is more than meat, and the body is more than raiment. Consider the ravens: for they neither sow nor reap; which neither have storehouse nor barn; and God feedeth them: how much more are ye better than the fowls? And which of you by being anxious can add a cubit to his span of life? If ye then be not able to do that which is least, why are ye anxious for the rest? Consider the lilies how they grow: they toil not, they spin not; and yet I say unto you, that Solomon in all his glory was not arrayed like one of these. If then God so clothe the grass, which is to day in the field, and to morrow is cast into the oven; how much more will he clothe you, O ye of little faith? And seek not ye what ye shall eat, or what ye shall drink, neither be ye of anxious mind. For all these things do the nations of the world seek after: and your Father knoweth that ye have need of these things. But rather seek ye the kingdom of God; and all these things shall he added unto you. Fear not, little flock; for it is your Father's good pleasure to give you the kingdom. Sell that ye have, and give alms; provide yourselves bags which wax not old, a treasure in the heavens that faileth not, where no thief approacheth, neither moth corrupteth. For where your treasure is, there will your heart be also. Let your loins be girded about, and your lamps burning; and ye yourselves like unto men that wait for their lord, when he will return from the wedding; that when he cometh and knocketh, they may open unto him immediately. Blessed are those servants, whom the lord when he cometh shall find watching: verily I say unto you, that he shall gird himself, and make them to sit down to meat, and will come forth and serve them.