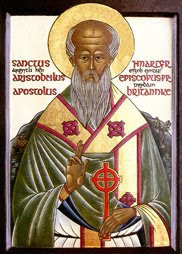 He was born on Cyprus. He was one of the seventy chosen by Christ and sent out to preach (Luke 10:1). He and his brother, the holy Apostle Barnabas of the Seventy, accompanied the holy Apostle Paul on his journeys. Saint Aristobulus is mentioned by the Apostle Paul in the Epistle to the Romans (Romans 16:10).

Saint Paul made Aristobulus a bishop and sent him to preach the Gospel in Britain, where he converted many to Christ. He endured the torments and malice of the pagans, and eventually baptized them. He later became a bishop to the Celts of northern Spain and Britain and is known as the Apostle of Britain.

Saint Aristobulus died in Britain among the people he had evangelized.

Propers for Aristobulus - 16 March - Companion of the Apostle Paul, Missionary and Bishop

ALMIGHTY and everlasting God, we thank thee for thy servant Aristobulus, whom thou didst call to preach The Gospel to the people of Britain: Raise up, we pray thee, in this and every land, heralds and evangelists of thy kingdom, that thy Church may make known the unsearchable riches. of Christ, and may increase with the increase of God; through the same thy Son Jesus Christ our Lord. Amen.

THE former treatise have I made, O Theophilus, of all that Jesus began both to do and teach, until the day in which he was taken up, after that he through the Holy Ghost had given commandments unto the apostles whom he had chosen: to whom also he shewed himself alive after his passion by many infallible proofs, being seen of them forty days, and speaking of the things pertaining to the kingdom of God: and, being assembled together with them, commanded them that they should not depart from Jerusalem, but wait for the promise of the Father, which, saith he, ye have heard of me. For John truly baptized with water; but ye shall be baptized with the Holy Ghost not many days hence. When they therefore were come together, they asked of him, saying, Lord, wilt thou at this time restore again the kingdom to Israel? And he said unto them, It is not for you to know the times or the seasons, which the Father hath put in his own power. But ye shall receive power, after that the Holy Ghost is come upon you: and ye shall be witnesses unto me both in Jerusalem, and in all Judaea, and in Samaria, and unto the uttermost part of the earth. And when he had spoken these things, while they beheld, he was taken up; and a cloud received him out of their sight.

AFTER these things the Lord appointed other seventy also, and sent them two and two before his face into every city and place, whither he himself would come. Therefore said he unto them, The harvest truly is great, but the labourers are few: pray ye therefore the Lord of the harvest, that he would send forth labourers into his harvest. Go your ways: behold, I send you forth as lambs among wolves. Carry neither purse, nor pack, nor shoes: and salute no man by the way. And into whatsoever house ye enter, first say, Peace be to this house. And if the son of peace be there, your peace shall rest upon it: if not, it shall turn to you again. And in the same house remain, eating and drinking such things as they give: for the labourer is worthy of his hire. Go not from house to house. And into whatso ever city ye enter, and they receive you, eat such things as are set before you: and heal the sick that are therein, and say unto them, The kingdom of God is come nigh unto you.