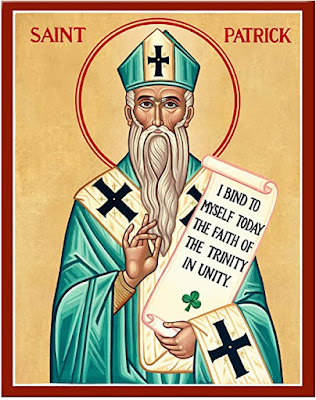 Patrick was born about 390, in southwest Britain, somewhere between the Severn and the Clyde rivers, son of a deacon and grandson of a priest. When about sixteen years old, he was kidnapped by Irish pirates and sold into slavery in Ireland. Until this time, he had, by his own account, cared nothing for God, but now he turned to God for help. After six years, he either escaped or was freed, made his way to a port 200 miles away, and there persuaded some sailors to take him onto their ship. He returned to his family much changed, and began to prepare for the priesthood, and to study the Bible.

Around 435, Patrick was commissioned, perhaps by bishops in Gaul and perhaps by the Pope, to go to Ireland as a bishop and missionary. Four years earlier another bishop, Palladius, had gone to Ireland to preach, but he was no longer there. Patrick made his headquarters at Armagh in the North, where he built a school, and had the protection of the local monarch. From this base he made extensive missionary journeys, with considerable success. To say that he single-handedly turned Ireland from a pagan to a Christian country is an exaggeration, but is not far from the truth.

Almost everything we know about him comes from his own writings, available in English in the Ancient Christian Writers series. He has left us an autobiography (called the Confessio), a Letter to Coroticus in which he denounces the slave trade and rebukes the British chieftain Coroticus for taking part in it, and the Lorica (or "Breastplate" a poem of disputed authorship traditionally attributed to Patrick), a work that has been called "part prayer, part anthem, and part incantation." The Lorica is a truly magnificent hymn, found today in many hymnals (usually abridged by the omission of the two stanzas bracketed below). The translation into English as given here is by Cecil Frances Alexander, whose husband was Archbishop of Armagh, and thus the direct successor of Patrick. She published nearly 400 poems and hymns of her own, including the well-known "There is a green hill far away," "Once in royal David's city," "Jesus calls us; o'er the tumult," and "All things bright and beautiful, All creatures great and small."

The beautiful prayer of St. Patrick, popularly known as "St. Patrick's Breast-Plate", is supposed to have been composed by him in preparation for a major victory over Paganism. The following is a literal translation from the old Irish text:

I bind to myself today The strong virtue of the Invocation of the Trinity:I believe the Trinity in the Unity The Creator of the Universe.

I bind to myself today The virtue of the love of seraphim,In the obedience of angels,In the hope of resurrection unto reward, In prayers of Patriarchs, In predictions of Prophets, In preaching of Apostles, In faith of Confessors, In purity of holy Virgins, In deeds of righteous men.

I bind to myself today The power of Heaven,The light of the sun,The brightness of the moon,The splendour of fire,The flashing of lightning,The swiftness of wind,The depth of sea,The stability of earth,The compactness of rocks.

Christ, protect me today Against every poison, against burning,Against drowning, against death-wound,That I may receive abundant reward.

O ALMIGHTY God, who in thy providence didst choose thy servant Patrick to be an apostle to the people of Ireland, to bring those who were wandering in darkness and error to the true light and knowledge of thee: Grant us so to walk in that light, that we may come at last to the light of everlasting life; through the merits of Jesus Christ thy Son our Lord. Amen.

WE were bold in our God to speak unto you the gospel of God with much contention. For our exhortation was not of deceit, nor of uncleanness, nor in guile: but as we were allowed of God to be put in trust with the gospel, even so we speak; not as pleasing men, but God, which trieth our hearts. For neither at any time used we flattering words, as ye know, nor a cloke of covetousness; God is witness: nor of men sought we glory, neither of you, nor yet of others, when we might have been burdensome, as the apostles of Christ. But we were gentle among you, even as a nurse cherisheth her children: so being affectionately desirous of you, we were willing to have imparted unto you, not the gospel of God only, but also our own souls, because ye were dear unto us. For ye remember, brethren, our labour and travail: for labouring night and day, because we would not be chargeable unto any of you, we preached unto you the gospel of God. Ye are witnesses, and God also, how holily and justly and unblameably we behaved ourselves among you that believe: as ye know how we exhorted and comforted and charged every one of you, as a father doth his children, that ye would walk worthy of God, who hath called you unto his kingdom and glory.

YE have heard that it hath been said, Thou shalt love thy neighbour, and hate thine enemy. But I say unto you, Love your enemies, bless them that curse you, do good to them that hate you, and pray for them which despitefully use you, and persecute you; that ye may be the children of your Father which is in heaven: for he maketh his sun to rise on the evil and on the good, and sendeth rain on the just and on the unjust. For if ye love them which love you, what reward have ye? do not even the publicans the same? And if ye salute your brethren only, what do ye more than others? do not even the publicans so? Be ye therefore perfect, even as your Father which is in heaven is perfect.