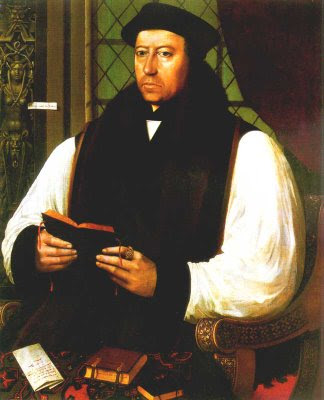 (2 July 1489 – 21 March 1556) was a leader of the English Reformation and Archbishop of Canterbury during the reigns of Henry VIII and Edward VI. He helped build a favourable case for Henry's divorce from Catherine of Aragon which resulted in the separation of the English Church from union with the Church of Rome. Along with Thomas Cromwell, he supported the principle of Royal Supremacy, in which the king was considered sovereign over the Church within his realm.

During Cranmer's tenure as Archbishop of Canterbury, he was responsible for establishing the first doctrinal and liturgical structures of the Church of England. Under Henry's rule, Cranmer did not make many radical changes in the Church, due to power struggles between religious conservatives and reformers. However, he succeeded in publishing the first officially authorised vernacular service, the Exhortation and Litany.

When Edward came to the throne, Cranmer was able to promote major reforms. He wrote and compiled the first two editions of the Book of Common Prayer, a complete liturgy for the English Church. With the assistance of several Continental reformers to whom he gave refuge, he developed new doctrinal standards in areas such as the Eucharist, clerical celibacy, the role of images in places of worship, and the veneration of saints. Cranmer promulgated the new doctrines through the Prayer Book, the Homilies and other publications.

Cranmer was tried for treason and heresy when the Roman Catholic Queen Mary I came to the throne. Imprisoned for over two years and under pressure from the Church authorities, he made several recantations and reconciled himself with the Roman Catholic faith. However, on the day of his execution, he dramatically withdrew his recantations and died a martyr of the Reformation. His legacy lives on within the Church of England and Anglicanism through the Book of Common Prayer and the Thirty-Nine Articles, an Anglican statement of faith derived from his work.

Most commemorate the martyrdom of Lord Cranmer on 16 October as part of the Oxford Martyrs, but I beleive due to his status as the first Anglican Archbishop of Canterbury and his work in bringing about the Book of Common Prayer, plus his heavenly birth 5 months after Ridley and Latimer, he deserves his own rememberance on 21 March.

Father of all mercies, who through the work of thy servant Thomas Cranmer didst renew the worship of thy Church and through his death didst reveal thy strength in human weakness: strengthen us by thy grace so to worship thee in spirit and in truth that we may come to the joys of thine everlasting kingdom; through Jesus Christ, our Mediator and Advocate, who liveth and reigneth with thee, in the unity of the Holy Spirit, one God, now and for ever. Amen.

For we are labourers together with God: ye are God's husbandry, ye are God's building. According to the grace of God which is given unto me, as a wise masterbuilder, I have laid the foundation, and another buildeth thereon. But let every man take heed how he buildeth thereupon. For other foundation can no man lay than that is laid, which is Jesus Christ. Now if any man build upon this foundation gold, silver, precious stones, wood, hay, stubble; Every man's work shall be made manifest: for the day shall declare it, because it shall be revealed by fire; and the fire shall try every man's work of what sort it is. If any man's work abide which he hath built thereupon, he shall receive a reward.